Zimbabwean Finance Minister Patrick Chinamasa was besieged in London by angry Zimbabwean exiles and had to be rescued by a vanload of police. 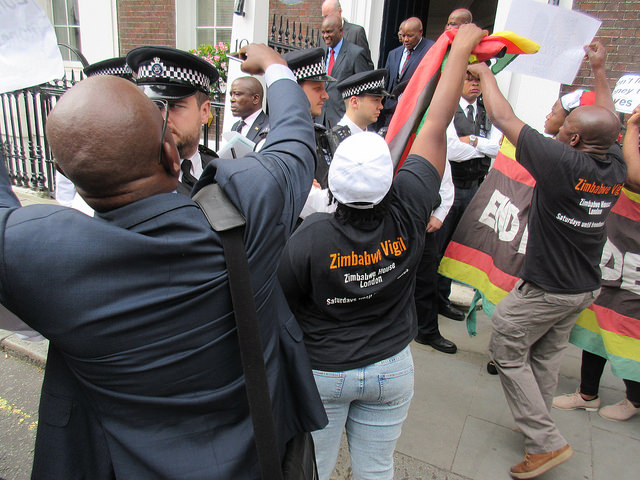 Zimbabwean Finance Minister Patrick Chinamasa was besieged in London by angry Zimbabwean exiles and had to be rescued by a vanload of police.

Chinamasa was speaking at the Royal Institute of International Affairs at Chatham House on a desperate visit to Europe to try to raise money for the bankrupt Zanu PF regime.

Protestors from the Zimbabwe Vigil and its sister organisation Restoration of Human Rights in Zimbabwe picketed  Chatham House with posters reading:

‘No to Mugabe’s lies’, ‘Don’t prop up the Mugabe regime’, ‘Don’t lend money to thieves’ and ‘Zimbabweans reject odious debt’. While the meeting was under way an impassioned Cephas Maswoswa sang protests songs.

It became apparent that Chinamasa and his companions were afraid to come out and face the music. The demonstrators deterred an attempt to exit from a side door of Chatham House and eventually the police arrived and provided a safe corridor for Chinamasa and his friends to access the Zimbabwean Ambassador’s car amid jeers from protestors, fired up by messages from home of  mounting unrest in all urban areas.

The Vigil, outside the Zimbabwe Embassy, 429 Strand, London, takes place every Saturday from 14.00 to 18.00 to protest against gross violations of human rights in Zimbabwe. The Vigil which started in October 2002 will continue until internationally-monitored, free and fair elections are held in Zimbabwe. http:/www.zimvigil.co.uk.