A mum who unknowingly passed on HIV to her daughter still feels guilty eight years later.

Mavis explained on The Jeremy Kyle Show that after having two sons with her first husband while living in Zimbabwe, she then had Paeda and then soon after moved to the UK.

When her daughter reached 10-years-old she fell ill and Mavis took her to the doctors for tests where she discovered she had HIV: “I was devastated, I couldn’t take it. It was like a brick hitting me.

“I thought I wanted to take my daughter and myself off a cliff.”

The mum-of-three was consumed with guilt when she found out that she was had passed it to her daughter after she herself was diagnosed.

But now 18, Paeda bravely appeared on the show to tell her mum that she wouldn’t have her life any other way.

As Mavis teared up, Paeda explained to Jeremy that despite bullies making her life difficult she will always be open and honest about her illness. 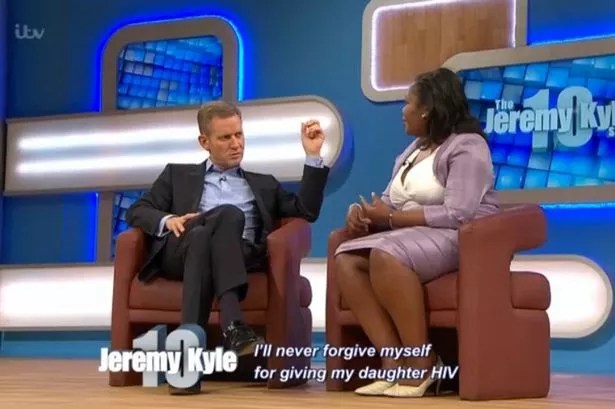 “There’s no need for her to be feeling guilty I have accepted who I am. It’s made me grow up. I was thinking I don’t know what type of girl I would be if I didn’t have HIV, it’s made me who I am.

“I’m really happy having it. It’s helped me and helped other people.”

Paeda explained that it hadn’t been easy but she wasn’t about to take any rubbish from people she didn’t want in her life.

Jeremy praised her as she told her mum: “You shouldn’t be feeling guilty because I am fine I am living a normal life, I am taking my tablets every day. It’s nothing, it’s not a major issue anymore. You shouldn’t feel guilty about it.”

Mavis was a little unsure how to feel but Jeremy reassured her their mother-daughter bond was clearly strong, and Paeda explained that doctors had told her she would live a normal life expectancy as long as she took her medication.

Jeremy encouraged them to speak with the show’s counsellor Graham Stanier to talk things through further.-UK Mirror